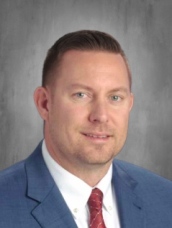 Welcome to Washington Middle School, as your principal, it is important that everyone understand that we strive to be the best in everything we do while as Washington. We challenge our students to think, dialogue and work to the best of their abilities.

I am a proud father of twin boys Mason and Carter, who will one day work their way through School District 129 as students. I have been married since 2013 to my wife who currently works at West Aurora High School.

I’ve proudly spent my whole professional career in School District 129. I started as a math teacher at West Aurora High School in 2007 and became the math department chair in 2012. I then moved into the role of Grades 6-12 Math Curriculum Coordinator in 2015. These experiences have helped me prepare for my new position as Assistant Principal of Teaching and Learning at Washington Middle School!

I believe that all students should be challenged to grow in their education. I look forward to being a General and am excited for the new challenges we will provide to your students!

My entire professional career has been spent in West Aurora. I was a Hill Hawk night custodian and paraprofessional. I was a Smith Superstar paraprofessional. Once I graduated from Aurora University with a Bachelor’s degree in Education and History, I became a Schneider Bulldog, a Lincoln Lynx, Freeman Mustang, and Hall Huskie classroom bilingual teacher. I earned a Master’s degree from Aurora University in Teacher Leadership in Math and Science and was able to become a Washington General where I have been a bilingual, social studies teacher. I became Dean when I earned my second Master’s in Educational Leadership. This is my second year of Assistant Principal of Operations and will continue to help lead and grow the school I have called home for almost a decade. In every school I have been at in West Aurora, I have seen greatness in our students and it has been my pleasure to see so many do great things as they become Blackhawks and beyond. I credit West Aurora with providing me with so many aspects of my life, the greatest of which is that this is where I met my wife, Kristin, and where I began my family of three children with her. I hope to be here for many years because with challenge, dialogue, and growth mindset, the Generals can become the very best of the best. Besides, we truly believe that once a General, always a General. 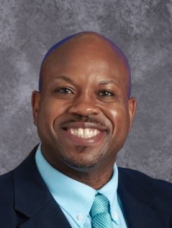 I’m thoroughly excited to be an administrator in District 129 that has a longstanding tradition of excellence and equity. This will be my 14th year in education serving students in various roles: Health and Driver’s Education Teacher, Football Coach, Dean of Students and Assistant Principal. I’m committed to fostering an educational culture that helps students engage in learning, flourish in relationships and participate in their community.

The best is yet to come…Go Generals!